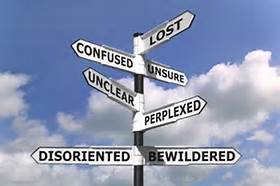 What a world we live in now!  The racial division has grown deeper and wider, a 14 year old kills his father and launches into a playground school shooting while yelling "I hate my life." Politically, it is no longer democrat vs. republican or even conservative vs. liberal.  It has become the political "elites" vs. the commons, or as one politician suggested - a 'basket full of deplorables.'  Everyone gets labeled with some dehumanizing word while things wax worse and worse throughout our nation.  There was a time when the United States of America was a shining symbol of freedom, strength, and integrity.  Now, we're in a condition that the Old Testament prophet Habakkuk understood well.

Habakkuk is an Old Testament book that is unfamiliar even to most professing Christians. But it is a beautiful prayer journal offering us an inside look at Habakkuk's intimate conversations with the God of the universe.  Habakkuk's ministry probably began late in the reign of King Josiah, who died in 609b.c.   Josiah had led a revival in Judah by destroying the idols and high places in the land and reviving the law of God and the worship of Yahweh.  Unfortunately, his son, Jehoiakim, was NOT of the same character as his father.

It was during Jehoiakim's reign that Habakkuk began to cry out to God for help and understanding.  Jehoiakim's reign was marked by oppression, injustice, violence, and disdain for God's law.  It was much like our climate today and Habakkuk grew impatient waiting for God to act (1:1-3)  But God responds NOT with time-specific answers, but with a call live by faith (1:5; 2:3; 3:17-19).  I would say that the theme of Habakkuk's prayer journal is found in Habakkuk 2:4b -- The righteous will live by faith.  It is a biblical principle repeated by Paul in Romans 1:17 and Galatians 3:11.  THIS is important because living by faith in the God of the universe must be more than just a mantra.  Speaking of faith is mere sanctimony if that faith isn't demonstrated in life.  Simply put, either you trust the Creator of the universe or you don't.

Now Habbakuk had engaged in this intimate conversation with God because of his distress over the conditions of his nation.  The spiritual condition, the political, cultural, moral and legal conditions made the nation of Judah ripe for judgment.  And Habbakuk interceded for himself and his nation.  He followed some basic steps that are good steps for all of us who find ourselves facing overwhelming stress, issues, problems and needs.  Martin Lloyd-Jones delineated those steps in his wonderful book Spiritual Depression.  Here is my adaptation of those steps.

When you find yourself face to face with problems and issues you cannot resolve and don't really understand, here's a plan of action:
1)  Retreat to Plan.   Get away from the distractions caused by the problem and get into the presence of God.  Get into His word, hear His voice, embrace His counsel.  When you want to hear from God and you have the intent to obey, God will speak.  But it is more likely to occur in a place where you are still and focused on Him.
2)  Remember this Principle.   It's not the size of the problem or issue, it's the size of your God that counts.  This is the matter of faith.  Either we trust Him or we don't there is no "middle ground."  Pray in faith, submit to God's purpose and leave the results to Him.    I love to apply Jeremiah 29:11 here.  I know it was written to Israel in anticipation of their exile.  BUT, it's in our scriptures for more than historical purposes.  The principle is the same.  God has a plan and it is perfect.  Submit because He is always good.
3)  Resort to the Principle.  Once again, this is more than talk.  It's living in obedience.   Don't just remember the principle and talk about the principle.  If you serve a big God, put it into practice.  Everything you know about God, His word, and His promises --- just load it up and believe.  If God says do something, do it!  If God says go somewhere, Go!  If God says wait, be still and know that He is in control.
4)  Rest in the Payoff.  It's called J-O-Y.  When you live with the constant conviction that God is ultimately in control, there is peace, contentment, and joy even in the midst of chaos.
When Pontius Pilate to Jesus, "Why don't you talk to me?  Don't you know that I have the power to release you or crucify you."  Then Jesus said, "You would have no power over me at all unless it were given to you from above."  John 18:10   Even as He faced the cross, Jesus was content to trust His welfare, His life into the hands of the Father.

In all that happens around us and to us, we must remember that God the Father is building HIS kingdom.  Not yours nor mine.  Not even the good old USA.  HIS kingdom.

So in these perilous and uncertain days, we don't have to understand things.  We need simply to trust God.  And the best thing we can do is get into the presence of God early and often.  And pray the prayer Habakkuk prayed as you pray for yourself, your family, your community, your church, and our nation;
Lord, I have heard the report about You.  Lord, I stand in awe of your deeds.  Revive Your work in these years; make it known in these years.  In Your wrath, remember mercy.    Habakkuk 3:2

I've had to accept the fact that as I get older, my hearing grows more dull.  Oh, I'm not deaf.  Occasionally, I have surprisingly keen hearing -- that is, unless there is background noise.  When that happens, deafness isn't the issue.  Discernment is!  Even when the voice belongs to my wife or one of my children, background noise like the hum of the car engine or background music in a restaurant can interfere with my discernment.  Oh, I know they're talking.  I just can't understand what they're saying.  The problem??  Sometimes we can't do away with background noise.  So we've decided to help the focus with a simple touch to assure we're always looking AT each other when we talk in those environments.
But you know, we can develop the same problem spiritually.  Our spiritual ears can get dull and the background noises of our lives begin to drown out what God desires to teach us through His word and our experiences.  Even within the Church, many professing Christians have a surprising unfamiliarity with scripture.  Oh, we might have our favorite verses, but even those are more about "what they mean to me" rather than how the Spirit has used them to transform me into what God wants me to be.  The PRIMARY means by which God communicates with us has become more like an IV bag to hydrate us when circumstances or sin begin to dry up our spirits.  We use it when we need it instead of drinking from it deeply every day.
What's happened??  Have we become so busy with politics and sports, televisions and smart phones, social networking and outdoor life that we don't have time for God's word?? There is nothing wrong with any of those things UNTIL they begin to crowd out our desire to be transformed by the power of God's word.  When that happens, our spiritual ears become dull and the "noise" from all those other things affects our ability to discern what God is doing around us and saying to us.
Jared Wilson wrote in the Threadway Bible study Abide,
". . . the messages of the environments we're most in and the routines we most practice shape our attitudes and behaviors."  Did you get that??  Where and how you spend your time will shape the way you think and act.
Now think about this!!  The Bible, God's word, was not given to help us.  It was given to transform us.  If we truly want to change the world, then we must begin by allowing God's word to change us.  The more time we spend there, the more it will shape the way we think and act.  But in order to do that, it just might require that we turn off some of the background noise that has drowned out the voice of God.

What could you give up or what could you change in order to spend some quality time reading the Bible each day?  Try it for 30 days!!  Don't read it in order to "learn" something.  Just pray and ask God to use your reading of His word to transform your life.  He will not disappoint you!
Posted by Zane Brown at 2:39 PM No comments:

Hearing the Voice of God