What Are You Looking For? 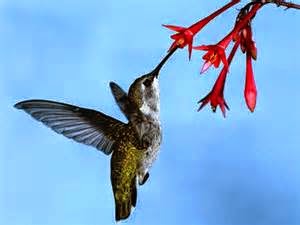 I've taken up a new hobby that my brother says is one step closer to dementia.  I've become a bird watcher.  With three bird feeders in the backyard, I've discovered great joy in watching those creatures who "don't plant or harvest or gather the harvest into barns.  Yet (our) heavenly Father feeds them."  At least twice, Jesus used birds to teach the principles of trust and God's provision.                      (Matthew 6:26; 10:29, GWT)

My fascination with birds, spiritual issues, and practical faith has led me to a conclusion.  Sitting at my kitchen table, I've watched hummingbirds dart from flower to flower extracting the sweet nectar that energizes them.  It's a good thing since a hummingbird's wings flap 50 times a second.

Driving the country roads of Colleton County, I've seen my share of buzzards picking away at roadkill.  They mount themselves on a tree limb or tower and just wait for some poor creature to meet an untimely end.  When that happens, they swoop end to feast on the misfortune.  Yes, I know it's the circle of life, but don't miss my point.

Now, this is NOT about the power of positive thinking.  It IS about making a conscious decision to a "good-finder."  It's about being a hummingbird instead of a buzzard.  Paul encouraged the Christians at Colossae that "Everything you say or do should be done in the name of the Lord Jesus, giving thanks to God the Father through Him."  Colossians 3:17 also v. 23
He reminded the Christians at Corinth that ". . . whether you eat or drink, or whatever you do, do everything to the glory of God."  I Corinthians 10:31  (GWT)

Negativity, pessimism, malcontent, whining, grumbling, gossip, and maliciousness -- all these things dishonor God and dishearten others. Optimism, faith, contentment, kindness, confidence attract and encourage others.  What does your attitude say about your relationship to God?  In your church life, in your family life, on your job . . . are you looking for the right things?  Paul wrote, " Since you were brought back to life in Christ, focus on the things that are above -- where Christ holds the highest position.  Keep your mind on things above, not on worldly things."  Colossians 3:1-2 (GWT)  Things above, things of glory, things that honor God.  What are YOU looking for?
Posted by Zane Brown at 12:01 PM No comments:

Honestly, conflict is an inevitable part of life.  Because we are imperfect people trying to do life together in relationships, we aren't always going to see things eye-to-eye.  Offenses WILL happen.  Misunderstandings WILL occur and sometimes, arguments WILL erupt.  It's just a fact of living in a fallen world order.   Ignoring this truth will only allow things to fester until greater damage is done.  So, what should we be doing?

A good marriage (or any type of relationship) is about being committed to resolving conflict.  It's about reconciliation and rebuilding.  Every home renovation requires both deconstruction -- tearing things out -- and reconstruction -- putting new things in.  The same holds true for healthy relationships.

Most fights in any intimate relationship are unfair and can cause irreparable damage.  When we resort to using worldly tactics, whether physical or verbal, the intent is to win at all cost.  The damage, both direct and collateral, can be costly.  Relationships end, children are traumatized, extended families are broken, and it can even indirectly affect our jobs, churches, and friendships.

So, let's get into these keys to a fair fight.  I am indebted to Chuck Swindoll for this list.  It is from his book, Strike the Original Match.  The intent is to show how to fight fairly according to the scriptures so that you can come through those battles stronger and more committed in your relationship.   The biblical passage for this list is found in Ephesians 4:25-32.

1)  KEEP IT HONEST.  v. 25   This has to be the most basic rule for disagreements with people that we love.  In the Greek, there are two verb tenses.  One is used to describe a punctiliar event -- something done once at a particular point in time.  The other is used continuing action, literally day after day.  The first is used in this verse.  Putting away lying is something that should be done once and for all time.  When we do that, we will speak honestly, respectfully and truthfully even in the tough times.

2)  KEEP IT CONTROLLED.  v. 26  Anger is not forbidden in the scriptures.  Instead, we're told to be angry and not sin.  What worldly things cause us to sin when we're angry?  Pride, revenge, self-pity, and lying are just a few.  When we yield to those things, we can crush a loved one and do great harm to the relationship.    See also Proverbs 16:31    James 1:19

3) KEEP IT TIMELY.  vv. 26-27   Paul is telling us two things here.  The first is that we should never let our anger build day after day, night after night.  When we do that, we give the devil an opportunity to sow seeds of bitterness, resentment, and contempt until one day, we explode over some frivolous affront and the damage is done.   The second is that there is a proper time to work things out and that time is when both parties agree to a time and a place.  There are occasions when emotion runs high and brain function (particularly as it relates to the use of the tongue) is slowed.  Sometimes, we do need to "sleep on it."  Let the emotions cool and set an appointment for a less volatile, controlled conversation.

4) KEEP IT POSITIVE.  v. 28    In any fight, we all want to get in our "swings."  Though he uses the act of stealing as an example here, what I want you to see is that right after he addresses the negative, he comes back with a positive solution.  When you condemn without offering correction, criticize without consoling, identify problems without proposing solutions, it can crush the spirit.  So even if you 'take a swing,' follow it up with a positive.

5)  KEEP IT TACTFUL.  v. 29   Instead of using angry language, outdoor voices, and pushing hot buttons, "Let no unwholesome language come out of your mouths . . ."  When we live by this verse, it helps us to develop a teachable spirit toward one another.  Tactfulness becomes a bond, an assurance, each to the other, that even though we disagree, we will attack the issue and NOT each other.  It means that we trust each other with our feelings and we trust each other to be able to take constructive criticism.

6)  KEEP IT PRIVATE.  v. 31  We shouldn't fight in public.  We should never publicly embarrass the people we love the most.  And we should never resort to that subtle, spirit-killing sarcasm or offensive criticism.  When there is a need to fight, keep it where it belongs, between the two of you.  NOT on Facebook, not with your circle of friends, not with your families of origin.  Between the two of you.
See  Matthew 18:15-20

7)  KEEP A CLEAN SLATE.  v. 32   When the fight is done, clean up the mess.  The tools for clean-up involve simply being kind and tender-hearted towards one another.  It is an act of grace that wipes the mental slate clean.  Don't continue to bring up past transgressions and use them as weapons.

And one more little tidbit.  Admit it when you're wrong.  Seek forgiveness when needed.  When you've lost the fight, stop fighting.  Be a good loser.  The words, "I was wrong," "You are right," and I'm sorry" can preempt a battle and prevent further damage.  Pray for one another and trust God to bring the healing.

Posted by Zane Brown at 1:24 PM No comments:

Getting Out of God's Way 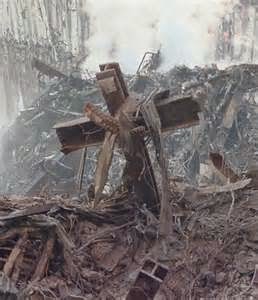 Eight days later, it was still an eerie sight.  Against the night sky, the portable lights accentuated the smoke and dust still rising from Ground Zero.  Helicopter gun ships circled the area reminding us of the instability of our situation.  As our Port Authority police work crew drive the four blocks from the command center to the place that used to be the World Trade Center, there was still this sense of surrealism.  But as we walked that final block to Ground Zero, passing rows and rows of armed military guards along the way, the surrealism gave way to the stark reality of cranes, bulldozers, dump trucks, and the stench of burning rubber and plastic.  I've never been in a war zone, but I cannot imagine one looking any worse that this.  220 floors, each weighing an estimated one million pounds had simply imploded and dropped to the earth below.

Our PAPD work crew waited patiently while the cranes and bulldozers moved loads of debris. Then came the sound of the horn and the call that a 'bucket line' was needed.  That was when the various agencies (scores from across the nation) came together to form two lines a hundred yards long and they passed five gallon buckets of debris from around air pockets on the debris pile to the perimeter.  This was also when hopes of finding survivors or human remains would peak.  On the night I stood there, over 3,000 people still remained unaccounted for and over 10% of those were firefighters and law enforcement.  For the brave men and women on the bucket lines, this wasn't a job.  It was a mission!

As I stood at the staging area for the Port Authority PD, I was approached by the Reverend Everett Wabst, chaplain for the Fire Department of New York.  He was checking credentials for on-site chaplains.  In the course of our conversation, I asked about Father Mychal Judge, a senior chaplain for the FDNY.  Everett had known Father Mychal well and told me that the Father had been killed by falling debris as he knelt beside another victim while administering last rites.  He then offered me a laminated care and said that it was Father Mychal's favorite prayer:

Father Mychal had great insight and I believe this prayer was based on Paul's words in Galatians 2:20  - I have been crucified with Christ.  My ego is no longer central.  It is no longer important that I appear righteous before you or have your good opinion and I am no longer driven to impress God.  Christ lives in me. The life you see me living is not 'mine' but it is lived by faith in the Son of God Who loved me and gave Himself for me.   The very best way to be used by God is to empty ourselves of ourselves so that Christ Himself can speak and act through us.  Sometimes, He might want to use us outside our comfort zones where danger lurks and sacrifice is a very real possibility.  The real issue, then, for us is obedience, a daily submission of the self(ego) to the will of God.

Now that you've been introduced to "Father Mychal's Prayer," perhaps his influence will continue to grow as more and more of us begin to pray, "Lord, take me where You want me to go.  Let me meet who You want me to meet.  Tell me what You want me to say, and keep me out of Your way."  After all, it is God Who changes lives.  We are merely His instruments.
Posted by Zane Brown at 8:30 AM No comments: